Tomorrow, January the 25th, in Greece, Syriza will probably win general elections with a wide margin. Syriza wants to put in place an anti-austerity policy which would be in opposition to the Troika’s recommendations.
The chart below allows an easy understanding of this vote and why Greek people want to follow another trajectory.
It represents GDP per capita as % of the European Union. In the 90’s it was 65 to 70% of the Union average. During the first decade of the 2000 it has jumped to more than 85% because of large European subsidies but without investment and productivity that could validate this improvement.
The austerity policy that has been put in place since the beginning of this decade has driven the GDP per capita to 60% of the Union average. This is lower than before the Euro Area inception.
Why would Greek people vote for the party that led Greece during this period of austerity?

This graph also indicates that the public debt adjustment that is needed, as public debt is on an unsustainable trajectory, will have to be done in coordination with the European institutions that hold the major part of it.
Greek people will not be able to make another adjustment.

At today’s meeting the Governing Council of the ECB decided that the interest rate on the main refinancing operations and the interest rates on the marginal lending facility and the deposit facility will remain unchanged at 0.05%, 0.30% and -0.20% respectively.

Further monetary policy measures will be communicated by the President of the ECB at a press conference starting at 2.30 p.m. CET today.

Yesterday I was asked the question of how the markets were taking into account the QE operation that could be announced by the ECB at its Thursday meeting
My feeling is that there is a doubt on its effectiveness in the medium term. The measure of providing liquidity is a monetary policy measure taken in a liquidity trap context as ECB interest rates are at 0%. The objective of this new instrument is to curb the profile of activity and prices on the upside.
The profile of 5 year in 5 years* interest rate continues to dive despite the increased certainty of an announcement on 22 January.
This anticipation by investors is not satisfactory since the 5 year in 5 years rate is just over 0.8%. If the medium-term equilibrium interest rate reflects the trend of nominal GDP growth. The current level shows that there is no anticipation of rapid and long lasting recovery instead this rate would have been oriented on the upside.
The ECB has not convinced investors that the QE will be the Silver Bullet

The Swiss National Bank (SNB) removed the ceiling of 1.2 Swiss francs to the euro. It also cut its key interest rate from -0.25% to -0.75%. The Swiss currency immediately surged against the European currency (see chart at the bottom of this post).
An adjustment had already been made in December: the key interest rate had been lowered but there was no change on the ceiling .
This measure came as a surprise as, officially, the cap had been cited as a key component of Swiss monetary policy. There has since been a sharp shift.

This calls for several comments:
1 – This ceiling had been implemented on 6 September 2011 when the crisis was threatening the Eurozone. At the time, the Swiss franc was the safe-haven currency. To avoid additional appreciation, the SNB decided to introduce this cap. This measure was also prompted by the very low inflation rate at the time, so as not to import more disinflation.
2 – This defense of the currency resulted in a significant accumulation of reserves (see the addendum).
3 – The abandonment of this cap reflects the idea that there has been a change in regime for the euro :
A – This certainly reflects the increased likelihood of QE from the ECB (to be announced on 22 January?) particularly after yesterday’s remarks by the European Court of Justice.
B – Consequently, the equilibrium conditions between the two currencies will change. A main impact of the QE operation will be to cause a further depreciation of the single currency.
The question is therefore whether to maintain the 1.2 ceiling at all costs or to allow a new equilibrium to take hold between the two currencies.
The SNB chose the second option. It is letting the market determine the new equilibrium. Defending the ceiling was probably perceived as counterproductive as 1.2 was probably no more an equilibrium
4 – To offset the restrictive nature of the appreciation of the Swiss currency, the SNB decided to cut its key interest rate to -0.75%
Will the combination of the two measures result in a tighter or more accommodative  monetary policy stance than before the decision ?
It is difficult to say for now but it is a risky play.
After the currency appreciation, Swiss companies have dramatically lost price competitiveness and Swiss will import disinflation. This is not good news as the inflation rate is already in negative territory at -0.32%. The core inflation rate is just positive at 0.25%.
5 – This severely negative interest rate measure plunges Switzerland into a twilight zone, as the yield curve is negative out to the 7-year maturity and the 10-year maturity is just above 0.1%. (when the translation from French was done the 10 year interest rate was at -0.16% and the whole yield curve up to 10 year maturity was in negative territory)
6 – The Swiss measure came as a surprise but let’s not forget that the fall in the euro against the dollar reflects a deep change in what is by far the most frequently traded pair on the foreign exchange market. Each currency is, at some level, defined against this rate. The plunge in the European currency below 1.2 against the dollar and the possibility that it will plummet further, in light of the massive liquidity infusion that would result from the QE, will force each currency to reach a new equilibrium. There will be volatility on this foreign exchange market this year. Each currency will have to find its place and its new equilibrium. 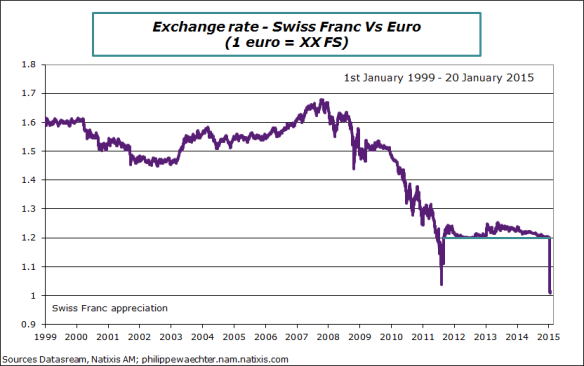 Addendum to the French version
The following chart shows foreign reserve accumulation as % of GDP. In the third quarter of 2014 it was almost 80% of GDP. To make a simple comparison, the total Fed’s balance sheet represents almost 25 % of US GDP.
This is the source of Paul Krugman discussion on the Swiss situation. He said that the SNB monetary policy was a QE operation and that the size of accumulated reserves was perceived as too big to continue.

In an excellent paper Frances Coppola (@Frances_Coppola) shows that disentangling structural fiscal balance from the budget balance is not an easy task as it relied on not easy to define hypothesis.
Therefore, the question on the importance of the concept is on the table. Can it be useful if its definition can be perceived as fuzzy? May be is it just a way for economists to speak a very specific language that will not be understood by non economist?

Her conclusion
“The aftermath of a severe negative shock is no time to be worrying about “structural” deficits. Better to restore the economy first, by every means available. Dealing with what would be better named the “residual” fiscal deficit is a job for the good times.”

Her article is here http://www.pieria.co.uk/articles/the_myth_of_the_structural_deficit

The attack against Charlie Hebdo on January the 7th may have disrupted the expected recovery in 2015 in France?
The decline of the Euro, the dramatic drop in oil price and the highly accommodative monetary policy from the ECB are the ingredients of the recovery that will emerge in France and Euro area throughout this year.
However, the attack dramatically increases uncertainty that could radically change behavior limiting then the expectations of recovery.

To highlight this debate we can observe two situations that can be perceived as close to that known currently in France. END_OF_DOCUMENT_TOKEN_TO_BE_REPLACED